10/24/2017 06:25:00 am
Below is an excellent meditation suggested by my friend Untwine, which aims to detach Gaia (Earth) from the Yaldabaoth and the two wormlike plasma parasites on all time/space dimensions & planes.

As per Untwine's suggestion, we will do this meditation as a group once a week on Sunday at 3:45 PM GMT before the Weekly Ascension Meditation.

A Facebook event has been set up for this new weekly meditation:

Here is the guided audio Youtube playlist for this meditation (updated):

You can convert GMT time zone to your local time zone here:


I'm posting here below a powerful article written by two dear friends of mine :

In Cobra's post on October 12th he referenced the article the War on Consciousness :

This comment is posed in the article: How do we win this war? We fight the Archons like the ancient Gnostics did: with knowledge, wisdom and detachment.

In trying to understand ways of detaching Gaia from the Yaldabaoth, Cobra was asked if the figure 8 meditation for cutting the ties by Phyllis Krystal could be used. Cobra responded, excellent idea!

Cobra also suggested including the two plasma wormlike parasites with the Yaldabaoth entity. They are mentioned here:

This mediation can be done individually or as a group. If doing it alone, it is best to do the meditation for 2 minutes when you wake in the morning and right before you go to sleep. The group meditation will be held once a week on Sunday at 3:45pm GMT prior to the weekly mediation.

Bring yourself to a relaxed state of consciousness. Connect with your I AM presence.

State your intent to use this meditation as a tool to speed up the process of detaching Gaia from the Yaldabaoth and the two wormlike plasma parasites on all time/space dimensions & planes.

Visualize two golden circles in a figure 8 on the ground in front of you.

In the center of the gold circle nearest to you, visualize "Gaia" written in beautiful flowers that grow from the ground of the circle.

Across from Gaia's circle, visualize the other gold circle with Yaldabaoth and the two wormlike plasma parasites on the ground.

Fill each circle with the essence of each being, feel them settled on the ground before you. Have the circles touching but not overlapping.

Starting at the point where the two circles touch, visualize a brilliant neon blue light flowing around the Yaldabaoth and two wormlike plasma parasites in a clockwise direction (flowing from the left up around to the right) on the ground until the entire circle is outlined in brilliant blue light.

As the light continues to flow, feel Gaia, Yaldabaoth, the two plasma wormlike parasites and the brilliant blue light, anchored to the ground.

Now see Arch Angel Michael's brilliant blue ray of light cutting the ties and detaching the two circles, releasing Gaia from the Yaldabaoth and plasma parasites. Give thanks for all of the lessons learned and to all beings who have assisted in freeing Gaia.

Link to Cutting the Ties Figure 8:

The whole meditation usually takes approximately 4 minutes. Some key things to keep the meditation most effective are

1) Keeping all aspects of the meditation (Gaia, Yaldabaoth/Parasites, and blue light) on the ground

2) Maintaining a healthy neon blue color around the figure 8.

by : Sonja and Sequoia

Interview with Cobra for the Ascension Timeline / End of Coronavirus Meditation 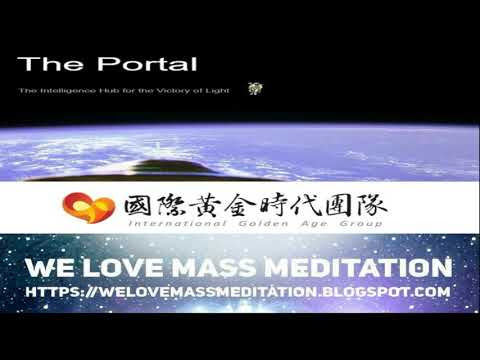 Update on March 23: Correction on interview transcript in bold

We Love Mass Meditation and International Golden Age Group had organized an interview with Cobra in order to raise the awareness of the Ascension Timeline / End of Coronavirus Meditation on April 5th at 2:45 AM UTC. In this interview, Cobra gave his view on the current planetary situation, the importance of this upcoming meditation and how people can prepare for the Event.

Here is the recording of the interview on our YouTube channel:


Special thanks to the International Golden Age Group for their technical support on recording and editing this interview, as well as creating the transcript.

Below is the transcript of the interview:

--- Beginning of the transcript --- Hoshino: Hello everyone. Today is March 17th, 2020. My name is Hoshino, and I am with two of my great friends Patrick and Jedi who are the representatives of the International Golden Age Group.

So welcome Patrick and Jedi.

Ascension Timeline / End of Coronavirus Meditation on April 5th at 2:45 AM UTC 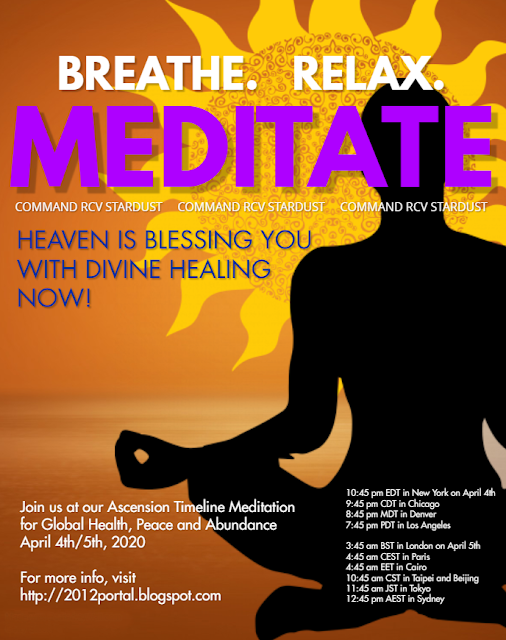 UPDATE on March 26th: Number of flyers added at the end of the post. Please feel free to share them.

Many ancient prophecies and teachings suggest that there will be a new Golden Age on the Earth / Gaia in the near future, and we are exactly at the dawn of this new age.

In order to have a new Golden Age of pure Love & Light, a strong purification must occur to remove all the darkness and things that are not of the highest purpose to humanity and all beings on the planet.

This purification is called the end time madness.

According to Cobra, the end time madness is happening individually, with many people freaking out and showing dysfunctional behavior, but also globally.

At the global level, it can be seen that there is currently a Coronavirus outbreak.

The Cabal and the dark forces know that their defeat is inevitable. They want to cause as much havoc as possible before their own downfall. They also want to destroy the s…
Read more

Urgent! Meditation to stop the Coronavirus outbreak every 4 hours

UPDATE ON FEBRUARY 28TH: Meditation instructions have also been updated to include more locations being affected severely by the coronavirus. More pictures have been added to promote Command RCV stardust.

https://www.rt.com/news/478842-chinese-coronavirus-global-screening/
China has confirmed that this new coronavirus can be spread from human to human. The DNA analysis of the virus revealed that it is very …
Read more